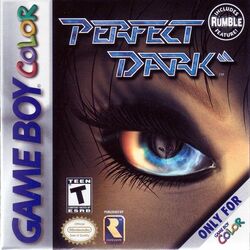 The Game Boy Color iteration of Perfect Dark was developed by Rare and released in late 2000. Although this game shares the same name as the N64 title, it is actually a prequel to the original game taking place some time prior.

The game features full motion video cutscenes that unfold the storyline for the gamer, a built-in rumble feature (a rarity among Game Boy Color games), and Game Boy Printer compatibility to print out character profiles. In addition, using the Nintendo 64 and the optional "Transfer Pak", players could use the cartridge to unlock cheats in the original game.

Set two years following the events of Perfect Dark Zero in 2022, Joanna Dark is still a student at the Carrington Institute and is eager to complete the final stages of her training. After accomplishing this and scoring an "A++" ranking, Daniel Carrington sends her to her first ever mission as an agent - She must destroy an illegal cyborg manufacturing facility, deep in the South American jungle.

The facility is headed by Mink Hunter, a highly dangerous terrorist whose purpose is to produce high-tech weaponry. Joanna eliminates Hunter and destroys the entire facility, but when Carrington contacts Joanna she reports that during her initial landing, she had witnessed an aircraft being shot down. Carrington starts investigating the coordinates and soon discovers that there is a UFO in the area and that dataDyne is salvaging the wreckage. Joanna's duty now is to snoop around the crash site.

During this process, she is captured and taken to the Pelagic I research vessel, along with the alien wreckage. A mysterious alien (a Maian) rescues her and orders her to sink the vessel along with the wreckage and escape. After a fight against dataDyne agent Octopus Prime, Joanna succeeds in sinking the Pelagic 1 and contacts Carrington, telling him her discovery that the wreckage belonged to another alien race called the Skedar.

Joanna then returns to the Institute, immediately having to help defend it from a dataDyne strike team sent to destroy any clues tying them to the conspiracy. After dispatching the intruders and shooting down dataDyne's attack helicopter, Joanna and the Institute begin to carry out further investigations against their rival corporation, leading into the events of Perfect Dark.

The game features a 2D overhead perspective, similar to Konami's Metal Gear Solid for the same platform, with the player being able to move and shoot in eight directions.

The campaign mode has Joanna initially having to complete a rather long "tutorial mode" consisting of a fixed sequence of challenges. Upon completing them, Joanna will then proceed through four huge missions using a combination of stealth and action strategies. The player must explore areas and collect items which will allow them to complete certain objectives, such as keycards, explosives, or laptops data. They can also pick up weapons, ammunition, and health dropped by enemies along the way if necessary.

The game also features several mini-games, including a target range and boss rush mode. completing these will unlock an extras menu.

There is also a multiplayer mode. With the help of a game link cable, two players can play up to eight different types of deathmatch modes. These range from the standard kill-the-other-person on a pre-set time to the Counter Force mode, where the first player must rescue two hostages while the second player has to guard them. Various maps can be unlocked as the player progresses through the campaign mode.

The game received negative to mixed reviews from critics. GameSpot gave it a 5.3 out of 10 under the tagline "Perfect Dark GBC does its Nintendo 64 counterpart justice, albeit haphazardly", criticizing that the game is too difficult due to the lack of health and ammunition, making it unplayable at times. IGN, however, gave it 7 out of 10, praising its extras and clean digitized voices.

Overall, it has a Game Rankings score of 66% (based on 9 reviews), which falls shortly below the average range. 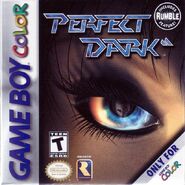 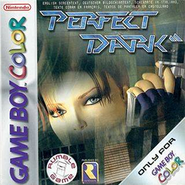 European Box Cover
Add a photo to this gallery 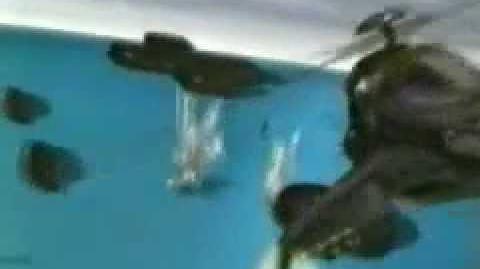 Perfect Dark GBC - Commercial US
Add a photo to this gallery

Retrieved from "https://perfectdark.fandom.com/wiki/Perfect_Dark_(Game_Boy_Color)?oldid=10128"
Community content is available under CC-BY-SA unless otherwise noted.