The Jetpack, canonically known as the Jetpac, is a drivable vehicle in Perfect Dark Zero.

Twin machine guns and hover capability for firing in place or on the go.

The Jetpac offers the user unlimited traverse over difficult terrain and shooting down enemies from the air. The mounted machine guns are rather accurate and they do sport quite a decent amount of damage when the shots connect.

The Jetpac has two modes of locomotion: The flight mode deploys the wings and the pilot may hover around and shoot from above.

The walking mode offers limited ground traverse over the terrain, the pilot can still use the machine guns but they travel slower than in the air.

The Jetpac is far less armored than the Hovercraft, as a single explosive blast can easily bring it down. Also the pilot is exposed, allowing skilled marksmen to kill the pilot with a well aimed shot and leave the Jetpac fairly intact for their own acquisition.

Presenting a slow, larger than usual target even on the ground, will make it less possible to miss as well.

Jetpacs also have a limited maximum altitude, meaning it is not possible to reach tall skyscrapers or buildings. Not all surfaces are safe for allowing Jetpacs to be deployed in walking mode. 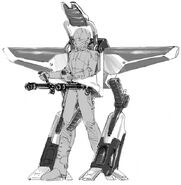 A concept art sketch of the Jetpac.
Add a photo to this gallery

Retrieved from "https://perfectdark.fandom.com/wiki/Jet_Pack?oldid=9813"
Community content is available under CC-BY-SA unless otherwise noted.